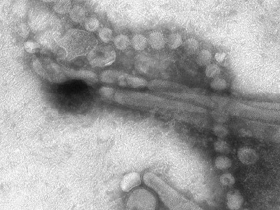 COVID Pandemic May Have Driven a Flu Strain Into Extinction

The binding of the influenza virus and its transmission still remain unknown, despite influenza being studied for decades. New research, however, suggests that two proteins on the influenza viral surface may use a ‘secret’ location to assist with ‘binding’ and ‘cutting’.

Looking more closely at two glycoproteins, neuraminidase (NA) and hemagglutinin (HA) which live on the virus surface have allowed researchers to better understand more about influenza. While it is known that HA is responsible for viral entry and NA is responsible for viral release, studies around the functional balance between the two is not possible, at times, because of ethical implications.

Lead researcher, Rommie Amaro, professor of chemistry and biochemistry and director of UC San Diego’s National Biomedical Computation Resource, described HA as the “glue” that helps bind the virus to cells, and NA as the “scissors” that help release the virus from cells. So, further understanding into how these two glycoproteins work together is important because then researchers will better understand how transmission happens between two people or from pig to human. If the virus either sticks too much or if the scissors are not good enough, then the virus cannot survive in the body.

This study suggests a novel way of creating balance between the actions of HA and NA by targeting the ‘secret site’ located on NA, which is also known as the ‘secondary site,’ with small-molecule ligands or drugs. Doing this may pave the way for less strain-specific methods for battling new variations of influenza.

Comet, the supercomputer at the San Diego Supercomputer, was used to create detailed simulations of influenza and how it interacts with different molecules. Comet gave researchers the opportunity to explore the biology of influenza that would not have been possible in a traditional “wet” lab.