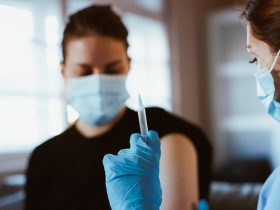 Attitudes towards influenza, and COVID-19 vaccines during the COVID-19 pandemic among a representative sample of the Jewish Israeli population

Even in children with cancer, the influenza virus typically has a benign course. For a study, researchers sought to determine if the influenza vaccine elicited a protective immune response in children with cancer. They looked at 75 patients with cancer who had received influenza vaccinations. Inhibition of Hemagglutination Titers of antibodies was measured before and after immunization. After vaccination, the protective rates for H1N1, H3N2, and influenza B viruses were 79%, 75%, and 59%, respectively, with seroconversion rates of 54%, 44%, and 43%. The differences between pre-vaccination and post-vaccination were statistically significant regardless of the approach used: seroprotection changes, seroconversion, and geometric mean titers analyses. Variables such as pre-vaccination antibody titers, the period after vaccination when the responses were examined, the age and type of malignancy, as well as the absolute lymphocyte count, were shown to be connected with the immune response; however, the results varied depending on the vaccine component.  Finally, it was confirmed from the study that the influenza vaccine protected a significant number of pediatric cancer patients, with this protection being more noticeable against H1N1 and H3N2 than influenza B. The immunological response following vaccination is considerable and appears to be regulated by a number of variables.